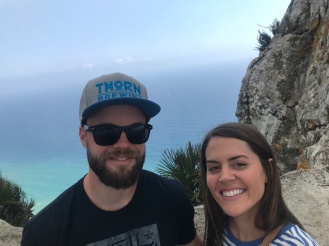 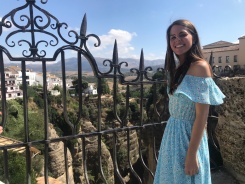 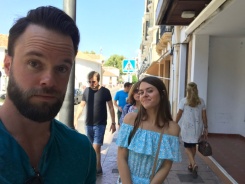 It’s that time again… time for a special travel edition of the Dineamic Duo blog! This shall be our most exciting and foreign adventure yet! Spain! We were lucky enough to go on a one week journey to the Southern coast of Spain (thank you Don and Althea!!). In this edition, we will talk about our time in Spain. Next week, we will explore Morocco!

Spain- the land of olives, sangria, tapas, paella, churros, and much more! Shockingly, we actually spent more time sightseeing in Spain than eating (for once!). Our resort was in Marbella, but we traveled to Malaga, Grenada, Gibraltar, Ronda, and Morocco. Ian’s parents and I even toured the Alhambra, which was a beautiful palatial city. Ronda was our favorite town by far. Beautiful buildings, landscape, and architecture. Very rich in history and very influential to Spanish culture (birthplace of Flamenco guitar and the site of the first bullfighting arena). I wish we had spent more time exploring that beautiful city nestled into the Spanish mountainside. Of course, all of that touring made us hungry! So we had to check out the local fare! 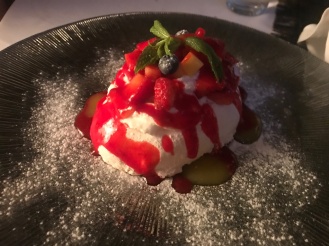 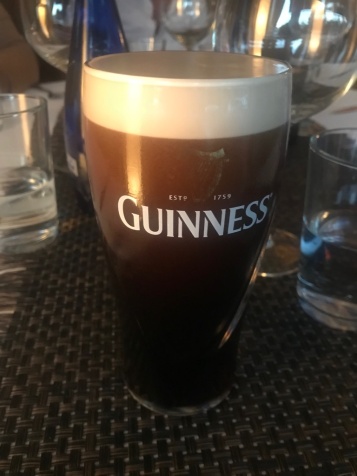 I am going to say something slightly sacrilegious here, but the best meal we had in Spain was actually at a British restaurant. I know, I know, but it was true! We had dinner one night at an upscale British restaurant called The Playwright. Every single thing we ate was incredible. I had the best chicken dish I think I have ever had. Chicken roulade filled with sage and onion stuffing then wrapped in bacon and served over chive mash (mashed potatoes for us Yanks) and covered in a thyme red wine jus. Whoever said British food lacked flavor has not tasted this dish. It was warm, filling, and bursting with flavor. Ian got Argentinian beef sautéed with mushrooms and onions and served in a puff pastry swimming in brandy and dijon mustard sauce. Also chock full of wonderful flavor. Three people at the table got the fish and chips, and boy did it look good! For dessert, we split a berry pavlova (in honor of our favorite TV judge Paul Hollywood on The Great British Baking Show). In the words of the man himself, it was stunning. Perfect meal and perfect atmosphere. Only thing we couldn’t get used to? The slow pace of European dining! We were there for three hours! We get it, it’s part of the culture, but these boring Americans get tired after 10 pm! 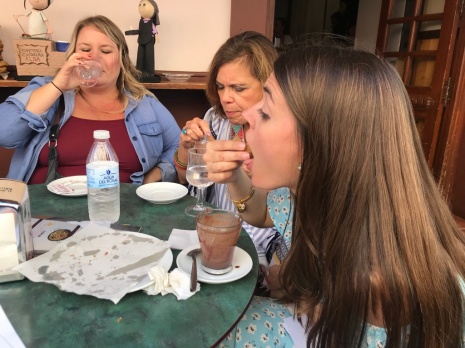 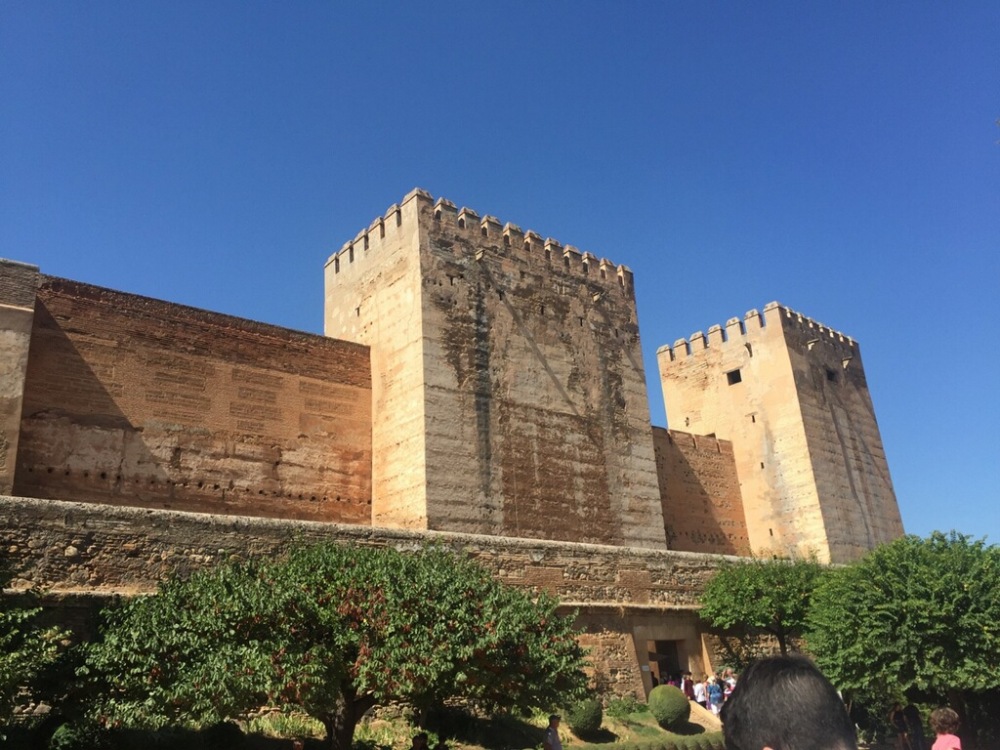 The other two food highlights I will touch on are the churros with chocolate and the tapas. We had churros and chocolate on two occasions, and let me just say I wish we had it on several more occasions. Spanish churros are different than the Mexican churro we picture in the US. They are not sprinkled in cinnamon sugar, but instead fried up fresh to order and then served with a chocolate dipping sauce. The chocolate is like a hybrid of hot chocolate and chocolate pudding. Not overly sweet, but perfectly complimenting the warm fried dough. I could have eaten 100 of these bad boys. Next, comes the tapas. We had several different tapas experiences while in Spain. By far, my favorite was this little hole in the wall locals spot in Granada called Bodegas La Mancha. It was recommended for us by our tour guide at the Alhambra. Located in Old Town Granada, it’s mainly just visited by the locals. It is a tiny spot- only 3 tables and the bar inside. The walls are all intricately carved wood and covered in Iberian hams. The sangria was outstanding. Rich, decadent, slightly sweet and fruity. The croquetas were out of this world incredible. Filled with a cheesy, potato mixture. We also had the “potato tortilla.” A very traditional Spanish dish– kinda an omelet meets hashbrowns. We accidentally ordered it regular and in sandwich form, but we were all the better for it! The best part? Most places you go in Granada for drinks will give you a free tapas order with each drink you get! Well worth it! 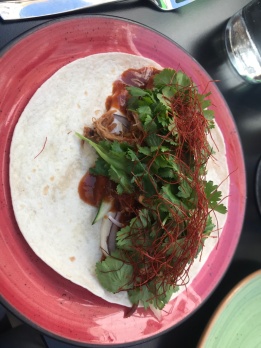 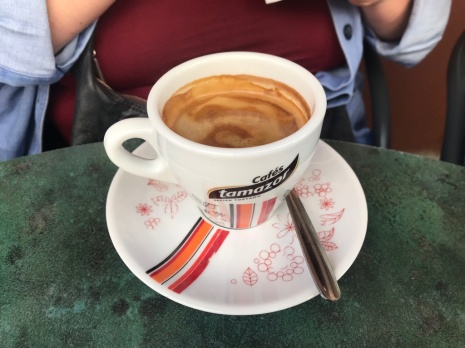 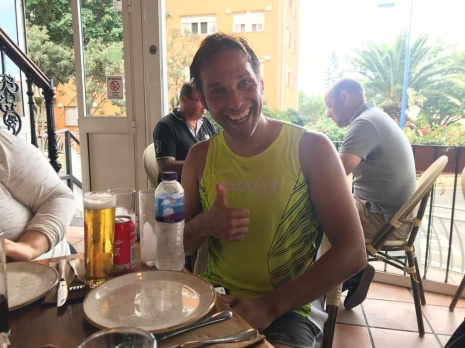 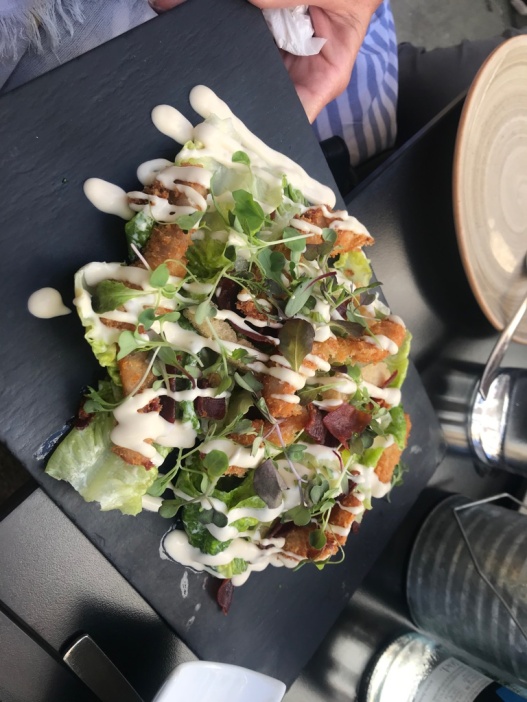 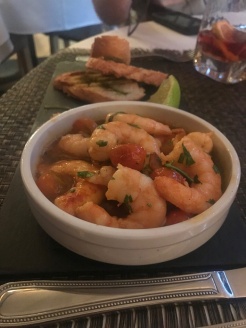 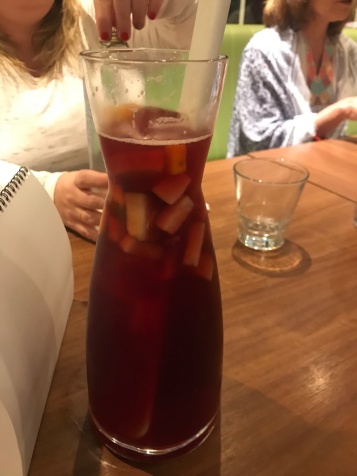 We thoroughly enjoyed our time in Spain. We tried lots of new things (including pig ears and whole, tiny baby shrimp). We saw lots of incredible sights and got to meet some interesting people. Join us next week when we talk about our journey in Morocco! 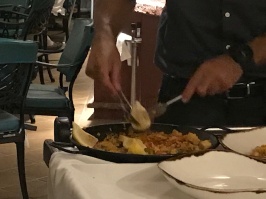 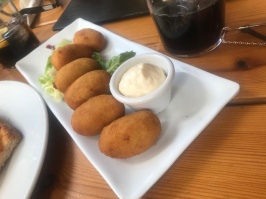 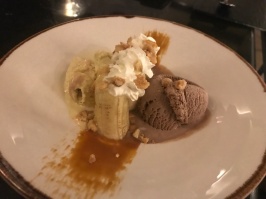 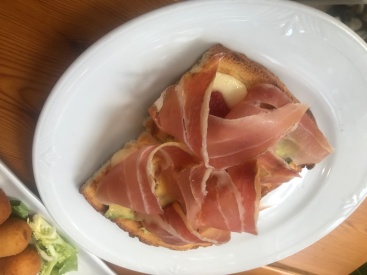 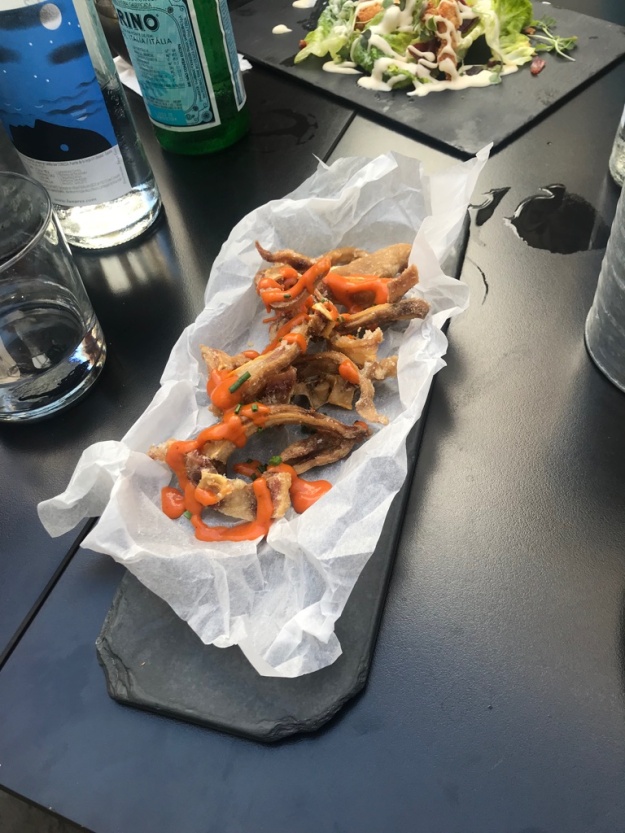 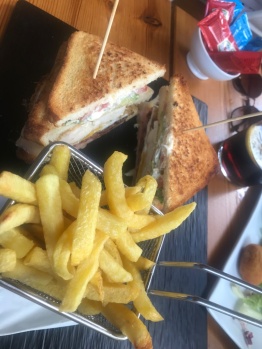 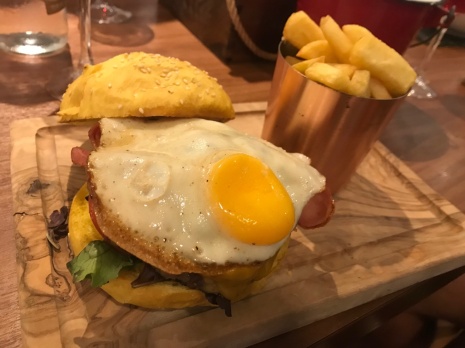