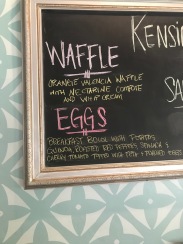 We have taken a little hiatus from marking things off the list. Busy summer, you know how it is. Last weekend we were lucky enough to have the whole Bassett clan in town for Labor Day weekend, so we decided to celebrate with brunch (as we do)! After much talking about it, we finally made a trip to Kensington Cafe! Ian and his mom have been there before, but I have been desperately wanting to try their brunch. We frequent their other restaurant, Del Sur, pretty often (maybe too often… I’m obsessed with their nachos). So we headed out early Labor Day morning, and we were lucky enough to beat the crowd! 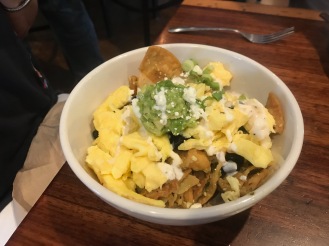 Kensington Cafe is a cute little, expertly decorated spot. Its bright, colorful, and inviting. The menu is varied and full of healthy (and not so healthy) choices. Since there were four of us, we got to sample a few different things on the menu. Of course, they were out of the Maple Banana Chia Pudding, which was the one thing I wanted to eat! These things happen I know, but I was desperately wanting to try it! I settled on the breakfast hash bowl– and it wasn’t half bad! It had potatoes, avocado, poached eggs, onions, and basil. The basil absolutely made it! I never would have thought to add it to a hash, but it was the cherry on top of the (hash) sundae. Sticking with savory, Ian’s mom got the chilaquiles and they were also good! They must use the salsa, and perhaps even the chips, from Del Sur, and it worked perfectly! Ian’s dad got the blueberry cornmeal waffles. The texture was great and the blueberries on top added a nice, not overpowering, sweetness.

Let’s move on to the start of the show. Let’s be honest, everything else just paled in comparison to what Ian ordered. Ian ordered the baked French toast, and it was otherworldly. It’s a giant sliver of French toast coated in streusel topping and then baked. It’s then topped off with mixed berry compete and powdered sugar. He ranked it as one of the top French toasts he has ever had (and he has had a lot of French toast). It’s warm, sweet, and the streusel gives it a crunchy texture on top, and the texture from baking it gives it that nice soft velvety mouth-feel without any eggy crust. It was definitely the best thing on the table, and possibly the best thing on the menu. Try it and let us know what you think!